The Wilmette Village Board unanimously voted on February 28, 2017 to ban the use of coal tar pavement sealers in Wilmette. Thank you to all the LWV-Wilmette members who worked so hard on this effort!

Summary of League Advocacy
The League first raised the issue of the toxicity of coal tar sealants and the need for a local ban with Wilmette's Board members. The Village Board asked the Village's Energy and Environment Commission (EEC) to study the issue. The EEC delivered its report on Coal Tar Sealants to the Village Board of Trustees on Tuesday, December 13, 2016, and agreed with the League about the detriments to the community of these substances.

The item was referred to the Administration Committee, chaired by Trustee Julie Wolf, for development of an ordinance to implement a ban. The other members of this committee are Trustees Cameron Krueger and Senta Plunkett. Village Manager Tim Freezer said a ban would be straightforward. The law department needed to look at implementation issues as, unlike in Winnetka which had no business licenses until they introduced one for companies doing seal coating as part of their coal tar ban, Wilmette already licensed businesses. Therefore the Village needed to figure out how to integrate it into existing licensing.

League President Gail Thomason provided the following comments to the Village Board at the December 13 meeting:

The League of Women Voters is appreciative of the thorough and comprehensive work of the EEC and agrees with its recommendations. We are glad to see the issue of banning coal tar sealants has reached the Board. We urge a ban of the use of coal tar pavement sealants to keep this dangerous product out of our community.

An expeditious approach would be to use the Winnetka ordinance + in effect for over 2 years - as a model for our own, thus providing consistency for local vendors as well as putting the ban into effect before the next sealing season begins.

Letting another sealing season start without a ban needlessly exposes Wilmette residents and our​ community to toxic chemicals.
Thank you for the opportunity to comment, and thank you to the Board of Trustees and Commissioners who volunteer their time on behalf of our Wilmette community.

A representative from the Lake Michigan LWV made a presentation at the Wilmette LWV board planning meeting in the summer of 2016 and alerted our league about potential dangers associated with coal tar sealants which are commonly used on driveways and playgrounds. LWV Wilmette decided to form an ad hoc board committee to look into this issue. Coal tar is a carcinogenic substance contained in certain sealants used to pave driveways, parking lots, playgrounds etc.

After investigating, the board determined that the risks to human (particularly children's) health and water quality are real and significant concerns with regard to the use of coal tar sealants. There are safer, alternative products available to use for driveway sealing but, at present, companies are generally only offering this product to communities that have a coal tar ban. Therefore, bans are imperative to safeguard public health.

House Bill 2958, banning the use of coal tar sealants in Illinois, has been championed by our State Rep. Laura Fine. Many Illinois municipalities have banned the use of coal tar sealants, including Highland Park, Winnetka, and most recently Wilmette (see below). All of these communities enjoy home rule status. Amendment 2 to HB 2958 would extend the ability to adopt a local ban to all Illinois communities.

How can you help? Spread the word to your friends and family in Illinois and ask them to reach out to their state legislators to support HB 2958. There is still time to pass this legislation in 2017! 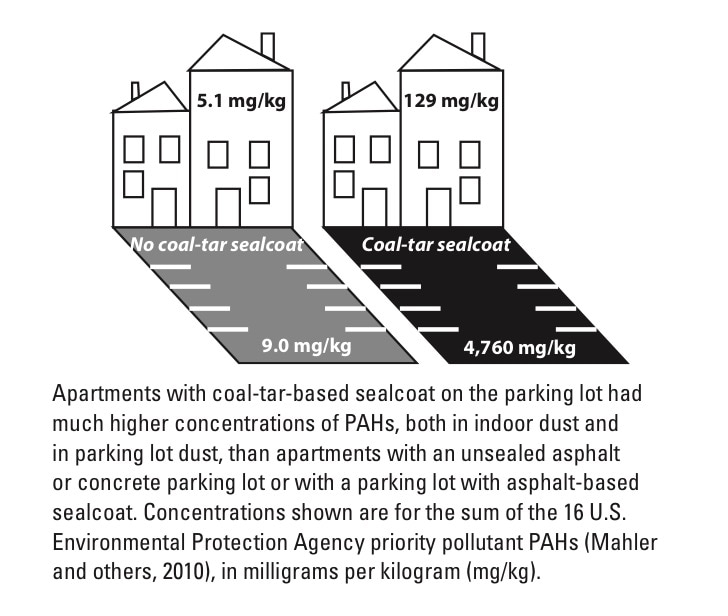 Q) What is coal tar?
A) Coal tar is a thick, black or brown liquid that is a byproduct of the carbonization of coal for the steel industry or the gasification of coal to make coal gas.

Q) Is sealcoat used on roads?
A) Use on roads is extremely rare. Occasionally a private property, such as a housing development, will choose to have the roads sealcoated.

Q) Where can I learn more?
A) Several studies have been published about the risks to human and ecosystem health from polycyclic aromatic hydrocarbons (PAHs) which are present in coal tar. These organic compounds are toxic, carcinogenic and cause birth defects. U.S. Geological Survey research showed that the largest source, about half, of PAHs in lakes is attributable to dust transported by stormwater runoff from pavement sealcoated with products containing coal tar ash.
A report from the USGS Geological Service is available at http://pubs.usgs.gov/fs/2011/3010/pdf/fs2011-3010.pdf

Freshwater Future, an organization that works for the healthy future of the Great Lakes waters, has materials at http://freshwaterfuture.org/ourissues/coal-tar-sealants/